Hottest Day of the Year

Today was the hottest day (so far!) in the year, so it was the perfect day to venture out to Fort Sisseton State Park.  In all my years of living here, I'd not yet attended the "Fort Sisseton Historical Festival."
The festival is billed as an annual event drawing "over 15,000 visitors" and including an encampment of 1860s US Army reenactors who periodically march or ride their horses in formation across the Parade Grounds wearing very, very hot dark blue wool uniform jackets, with antique rifles on their shoulders, while their colleagues shoot loud blanks from cannons.
There is also a "Rendezvous Encampment" of fur trader reenactors. These reenactors included families- also sweating, though in their comparatively cooler "homespun" shirts, skirts, and felt hats. [Okay, I am really trying to not be too snarky, but one guy was actually wearing a FUR CAP. I mean, come on... fur traders were smart enough in the 1860s to NOT WEAR FUR CAPS on 98 degree summer days, weren't they??]
In spite of all the "historical," I did chuckle a lot. While not actively critiquing authentic attire, I was busy noticing how remarkably difficult it was to take a photograph of anything "historical" without a pickup truck, Igloo cooler, or Yeti mug in either the foreground or background. I guess I should look on the bright side- all these over-heating folks didn't have to drink warm water dipped from a nearby lake or stream, as they would have had to lug to their camp in heavy buckets "back in the day!"
As you might imagine, neither Fort Sisseton State Park nor the "Fort Sisseton Historical Festival" are a popular local attraction to tribal members.... since it was built and served as US Army Fort Wadsworth (starting in 1864) to "further strengthen and protect the Dakota Territory" from "hostiles" who were deemed likely to "attack farmers and settlers." 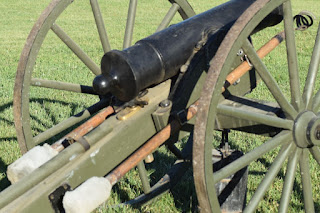 The fort was later renamed "Fort Sisseton" in recognition of the fact that the Sissetowaƞ band of the Dakota Nation, after escaping the threat of complete annihilation on their reservation land in Minnesota by going to Canada, came back to this area, signed a treaty in 1863 that gave up huge tracts of their homeland, and agreed to be non-combatants. They then provided "scouts" to help protect the Fort.
Thus, the Sissetowaƞ band, as well as the Wahpetowaƞ band, both which had already been heavily Christianized and were considered by the government to be well on the way to assimilation, were deemed "friendlies" and even allies of the US Army. Of course, some tribal historians and elders do tell the story a bit differently: they "came back home from Canada, and then sold out, becoming traitors and serving the invaders as 'scouts' against the rest of the Dakota and Lakota Nation as it tried to defend its homeland." I love how "history" can tell such different versions of what happened, don't you?

Side note: the Lake Traverse Reservation boundaries were established by the Lake Traverse Treaty on Feb. 19, 1867. Initially the reservation encompassed one million acres. It now covers about 107, 200 acres. Much like what happened to Indigenous nations across the continent, treaty land formally promised "forever" was soon opened up for white settlers in spite of the treaty. Here, that land is still owned by non-tribal members who ranch and/or farm it, or who live in nicely built homes and summer places along the shores of the many glacial lakes in the area. Because of this, this reservation is known as a "checkerboard" reservation.

I went to the Historical Festival in part to see how the original people of the area were portrayed. In the State Park museum, there is a small exhibit, with absolutely no discussion of how and why the reservation is here, nor much of a mention of the many Sisseton Wahpeton Oyate members who were, and are, important to the area's history. There's really very little of the past or current tribal history mentioned. Since this was to be an historical reenactment, I wondered how and who would be there from the tribe... or, aware that tribal members might be unlikely to participate, how the State Park Service would portray their story and history.

Guess what? They didn't.

Yes, there were three tipis. None had the traditional 17 pole set up characteristic of the Dakota and Lakota people. I assume the families there were reenacting fur traders as they were predominantly blond and fair skinned (and sunburned!). One tipi flew the flag of a trading company from the top. Another, oddly enough, had paintings of  Asian carp on it, above some more "traditional" style paintings of horses. Yes, I know: the Asian carp is an "accidental" that arrived on the continent in the 1970s and escaped to the wild, where it has reproduced like crazy. Not exactly sure how they swam onto the tipi though...

I looked around carefully. I even asked several State Park people where I could find the Dakota encampment. But, alas....  the original people of the land, and the people after whom Fort Sisseton was named, were rendered invisible (again) at the Fort Sisseton Historical Festival.
I guess another letter to the South Dakota State Park system is needed. Clearly, the one I wrote some 20 years back, the first time I visited the State Park, didn't do much.
Perhaps the increased awareness of racism in our country means my letter this time will have an impact. One can always hope, right?
Source URL:
http://glimpse-god.blogspot.com/2021/06/hottest-day-of-year.html