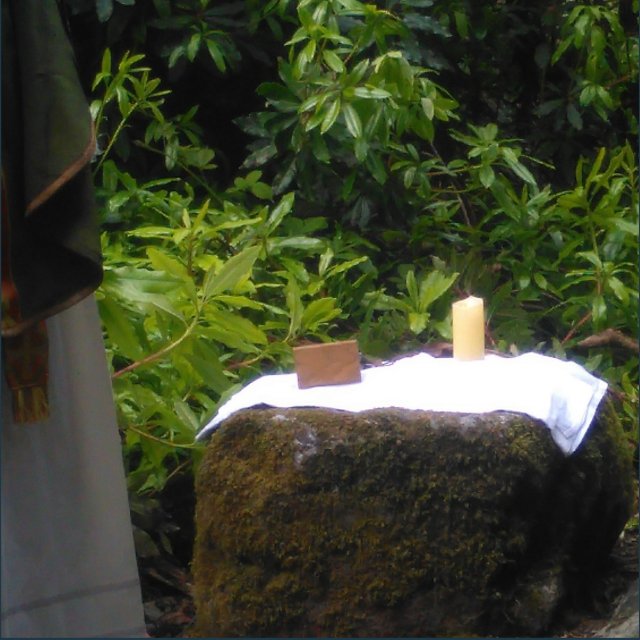 Kathryn is currently in her second year of service on the Core Team. She moved (back) to Ireland in September 2020 and looks forward to any and all ministry opportunities, certainly those on Zoom but especially those in-person.

We walked more than an hour in the warm weather, up a hill, seemingly without any direction or purpose. When we finally stopped, the path was hardly two people wide. We sat wherever we could—on rocks, on branches—we were hardly an organized bunch. The trip that day was quite deliberate. It was a pilgrimage to a Mass rock used by 17th century Irish Catholics during the time of the penal laws. We celebrated this two thousand year old sacrament together in simplicity under the open sky, remembering those who couldn’t worship openly and freely. But if I’m entirely honest, I don’t think I grasped the importance of the act. And I failed to fully appreciate the concept of risking my life to attend Mass and I took for granted that it could easily be a part of my daily life. (Photo: Mass Rock)

That was in June 2017. Fast forward to Christmas 2020. This was our last public Mass for 135 days. Covid restrictions in Ireland ebbed and flowed with the decrease and increase of infection rates. It’s worth noting, however, that Ireland’s extended lockdown was longer and stricter than most EU countries. Also of note is that during this spring 2021 lockdown, the Irish government made the celebration of Mass (aside from a wedding or funeral) an offense punishable by law. Having had a six-week lockdown earlier in the fall, which also resulted in the cessation of public Mass, we were already well connected to the underground Mass network. In those 135 days, we only had to watch Mass online twice. Only twice. We were the underground Church.

The “new normal” quickly fell into place. We knew where to find Mass in the sacristy, or which back door to knock on to enter the church. Anyone wise enough to watch our movements would have noticed the pattern, but we largely went about unseen. As there weren’t very many options, we scheduled everything in our day around Mass. We perfected the art of the silent responses so the microphone didn’t pick up our voices on the live-streamed Mass. We made sure to walk around the long way after communion so we weren’t caught on camera. What strange skills to master.

All the while, I rode a roller coaster of emotions. Feelings of gratitude, appreciation, thankfulness… for Mass itself, for the small community of friends we worshiped with, for the priests who invited us and risked their reputations. Then there were feelings of guilt… Why should I be so fortunate to come to Mass every day?  What about our friends who want this more than me? Am I just taking this opportunity for granted? And, of course, the feelings of fear and anxiety…What if we’re caught? Would we be fined €500? Was this the way I would start prison ministry?! (Photo: Empty Church)

On Monday, 10th May, our fast ended. The country began its re-opening plan and public worship was once again permitted. That day we were easily 100+ people (keeping to the protocols of masking, social distancing, and using separate entrances for each pod) in the church. At the end of Mass the entire congregation erupted in a round of applause. I think we started ourselves. But the joy was tangible! We longed to be together. YouTube Mass simply can’t substitute for being together as the Body of Christ. Online adoration isn’t the same as receiving Jesus—body, blood, soul, and divinity. People loitered in their pews, taking a few extra moments of thanksgiving. Neighbors turned to one another for a chat. Actually, there was quite a buzz of conversation! Such tangible signs of how good it is to be together again. Touchstones to hold on to, lest I somehow take Mass for granted again. It was a deep experience of the new life of Easter. Amen! Alleluia!