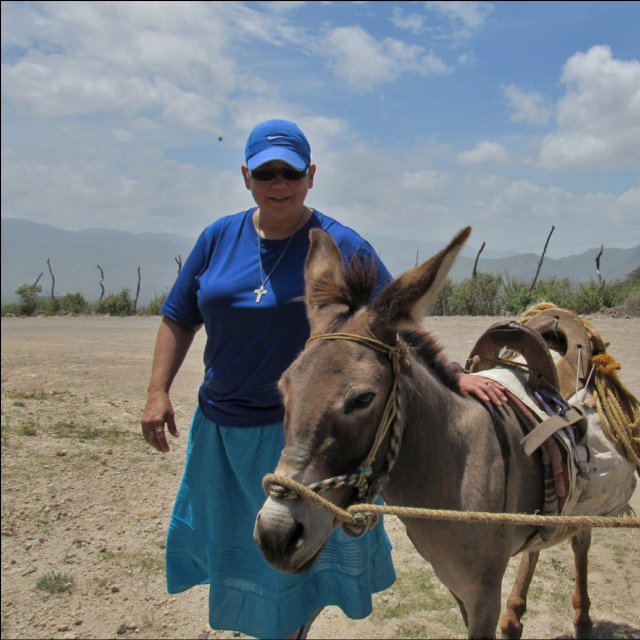 This past July I was blessed with the opportunity to travel to Oaxaca, Mexico, to the Instituto Cultural Spanish Language/Immersion School after receiving a scholarship from Giving Voice.

After entering the Sisters of Providence in 2012, I was encouraged by my Sisters who spoke Spanish to pursue my education of the Spanish language. I recall Sister Florence Norton saying, “Joni, the language is in you. You just have to let it bloom.”

I have to admit that there was real fear of leaving the comforts of home and embarking to a country where I wasn’t even sure I could speak the language. It didn’t help that some people made it a point to remind me of all the awful things that could happen. I knew that fear was not an option, and I needed simply to trust the nudge of my heart and go to Oaxaca, Mexico. I decided I would set aside all my fears so that I could listen to God’s invitation. I knew that if I could get out of the way God would pull me in and be my guide.

Arriving in Oaxaca Mexico was surreal. I was able to communicate enough to find a taxi and get to the home where I would be staying for the next 21 days. I felt I had landed in the arms of Providence after meeting Sister Hermana Soledad Hernandez, of Trinitarians of Mary from California. She was staying with her biological Sister for a few more days in the same house I would be staying.  What a blessing she was to me during those first few hours upon my arrival. Thank you, Hermana Soledad for your kindness.

I started school officially on Monday July 9th, but I felt my education started the moment I boarded Aero-Mexico to Mexico City on July 7th.  The first week was very difficult. I could hardly  understand what people were saying because everyone spoke so fast. After listening to Spanish for two weeks nonstop and taking classes, I began to understand more. It was as if something in me started to bloom, I thought of  Sister Florence’s words. I felt as if pieces of me were being reunited with pieces of me that had been scattered into the wind. Sister Florence was right, I thought, “The language was indeed in me.” I had heard it spoken growing up. My dear grandfather Francisco M. Luna had spoken Spanish to me. I even began to dream about my grandparents in Spanish. I would wake up so overwhelmed and filled with gratitude for these Providential encounters.

The people in Oaxaca helped nurture my desire to learn Spanish. They were patient, kind, friendly and forgiving at my struggle with the language. At first I worried that I would have no transportation. However, I recall feeling perfectly safe walking to and from school and to the market in the evenings.

I also had the good fortune of visiting some of Oaxaca’s  most popular sites. I visited Monte Alban, a large pre-Columbian archaeological site; the town of El Tule which is the home to a 2000 year old tree and one of my favorite spots Hierve el Agua which is a natural mineral pool on the edge of a petrified waterfall that sits on the very top of a mountain. Meeting people along the way to the mountaintop was one of the most beautiful experiences. It was as if I had gone back in time. Goat/sheep herders took their herd up and down the mountain to eat, women cooked outside their hut homes and invited travelers to come in to eat, and men traveled up and down the mountain with donkeys carrying supplies.

What a beautiful gift these encounters were to my heart and soul! I thought about my ancestors, and how they might have lived before coming to the U.S.  I admired the simplicity and understood for the first time why Jesus often went to the mountain top to pray. I miss Oaxaca, and God willing will return next summer to continue my Spanish education.