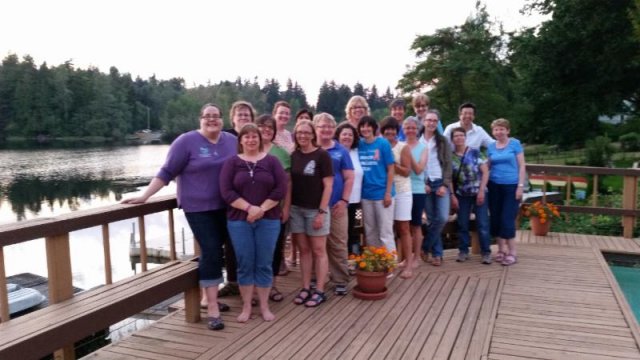 I was recently lamenting to a kind ear: "In my ministry I am a well-respected professional, and among my peers, I am a well-informed and in-tune Gen Xer. However, when I get back to community, I am deemed the 'young one.' At the age of 45, I am equated to a young adult, just beginning to develop myself into adulthood." But then again, sisters in their 60's are considered 'young' as well! Something about this picture just doesn't seem right.

Sandra Schneider's well-circulated talk that was given this year at the CORI Conference (Ireland) references the idea of a "new normal." This term and her use of it gave me pause. I will not begin to reflect and dissect this term; however, I will be borrowing it (and stating up front that I will be using it out of context).

At the inaugural Giving Voice 40's Retreat (August 2014 in Seattle), I had the privilege of connecting with Women Religious in my own age group. They came from a diversity of backgrounds, nationalities and ministerial experiences. Some had been in religious life for decades, others were just beginning, and a group of us were somewhere in between. Given our diversity, there was one thing that we held as a single voice, resounding with clarity the declaration: "We are the new normal!"

What I saw during this weekend was a vibrant and dynamic group of women who can create a new way of religious life. There is a desire to bear prophetic witness through the development of new ministries that address the signs of our times. There is a desire to be a faithful presence in our world as a beacon of hope and Christ's love. Religious life is definitely changing . . . it is not dying! What is dying are the old attitudes, the clinging onto youthfulness by not accepting the aging process, and the rigidity of authority and power structures. These things (and more) must die in order for new life to emerge. And, from what I saw during this weekend, new and capable life is emerging.

I began this reflection with my lamenting regarding perception of age and capability. This was a very strong theme threaded throughout the weekend. It was not part of the formal process; rather, it developed in conversations over meals and during our free time. My lament is mirrored in each sister with whom I spoke. It is a lament that cuts across congregational boundaries. Is there an answer? I think our resounding reaction and declaration to Schneider's term speaks clearly: "We are the new normal!"

I find normalcy rather mundane - kind of the same old, same old. With a playful attitude, we were breaking down the walls of the mundane and expressing excitement for the possibilities. The new normal is not about structures and institutions. The new normal is embodied with diversity, energy, and excitement for the mission. I can confidently say that the women I spent time with at the Giving Voice 40's Retreat embody these things and I can't wait to grow old with them as we develop Religious Life into the 21st century.