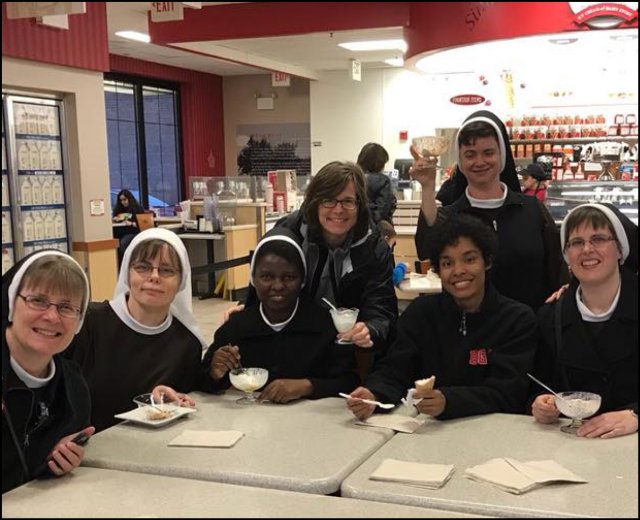 On the weekend of April 12-15, I attended a Formation Convocation in Chicago with my community, the Felician sisters. I joined 51 of our sisters: those in leadership, in varying stages of formation, and those in formation. What I expected to be a meeting turned out to be a community retreat where we reflected on formation that is centered in a relationship with God. We shared personally in small groups. Activities were planned that facilitated deep group discussions, too. In one of them, formators and those in formation took turns discussing their responses to reflection questions about the current formation process. The sisters who listened were moved by the personal disclosure of those in initial formation; those who disclosed were touched by the love and support they experienced. They trusted that what they said would be accepted with love and honor. It was an experience of accompaniment for us all.

I was a part of a panel that shared how our family life provided an experience of the transcendent. I had said yes to the invitation to respond to this question in the presence of community, despite the fact that my childhood had yielded a more deformed than transcendent image of God and the Catholic Church. My background includes divorce, anger and hurt feelings, lapsed Catholicism, and all the issues that come with them. I reflected on the topic for a week before the Convocation, but arrived in Chicago unsure of what I would say to my sisters.

On the day of the panel, the presenter shared personally about how her parents and childhood experiences influenced her image of God. By that point of the weekend, the Holy Spirit was definitely moving among us. I could feel the love in the room, and my fears subsided. I was opening up to the presence of God in our midst, especially present in the hearts of my sisters. I told my story with the rest of the panelists—unfiltered, without holding back. As I spoke, I could feel the support and encouragement of my sisters, and I knew that it was received in love. Later, several of them approached me, thanking me for sharing. I was glad that I did! It’s risky to be vulnerable, but it was a blessing to receive their sisterly love.

At the end of the weekend, we reflected on the experience. We agreed that sincere disclosure and trusting vulnerability had been met by deep listening and loving acceptance. It was a Spirit-filled time of authenticity and growth. Many of us noticed the disparity between what transpired and what daily life was like at our convents. The realization was voiced: Why don’t we self-disclose? How little we know each other! Spiritual goals were formed: Be vulnerable! Respectfully receive what others share! Tell my stories! Go deeper in daily conversations!

I made one, too: To remember how openly I had shared and how lovingly it was received.