Transformers: Religious on the Rise 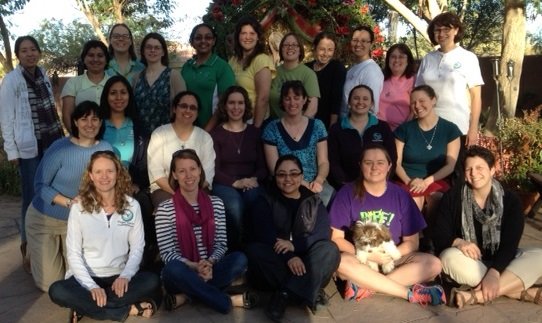 During this last Giving Voice 20s/30s gathering in Phoenix, I spent time reflecting on my transformative journey through religious life especially as I stand between two milestones. My first milestone was my final profession of vows last July with the Sisters of Charity of Leavenworth, an eight year journey filled with hope, tears, laughter and joy. When I stood before my congregation, family, and friends and gave my resounding yes to love God, God's people and creation, my sisters in Giving Voice were present with me in spirit. The Giving Voice National Conference was happening in California and I was aware of all their prayers for me. Giving Voice's annual 20s/30s gatherings have been a crucial part of my formation experience, allowing me to strengthen and deepen friendships across congregations.

When I began coming to Phoenix for this gathering four years ago, I found myself mostly listening to other women's stories. As I continued to return annually, a gradual transformation to find my place within religious life has unfolded. While listening to the stories of women in initial formation and temporary vows, I realized how important it was for me to not only listen, but to share my stories from my formation. I have found my voice. The powerful reciprocity in sharing stories gives one courage to move forward on her journey, as well as transform herself and her congregation at the same time. Below in the Voices of Younger Women Religious section I asked two women in different stages of religious life to reflect on their experiences at the 20s/30s gathering: Mallorie Gerwitz first year SCL Candidate and Mary Perez, Dominican Sister of Mission San Jose under temporary vows.

My second milestone is fast approaching; I stand on the verge of turning forty.  Recognizing the gifts of relationships I have received, I have been able to age-out gracefully knowing these friendships will continue in my 40s. I look forward to Giving Voices' first 40s gathering in August. Standing on the edge of a new decade does give me pause to reflect and be grateful for what I have received. Giving Voice gives me the strength to go forward into the future of religious life, slightly older and yet very interconnected with those that came before and will come after me.