Q&A with Erin about DACA students 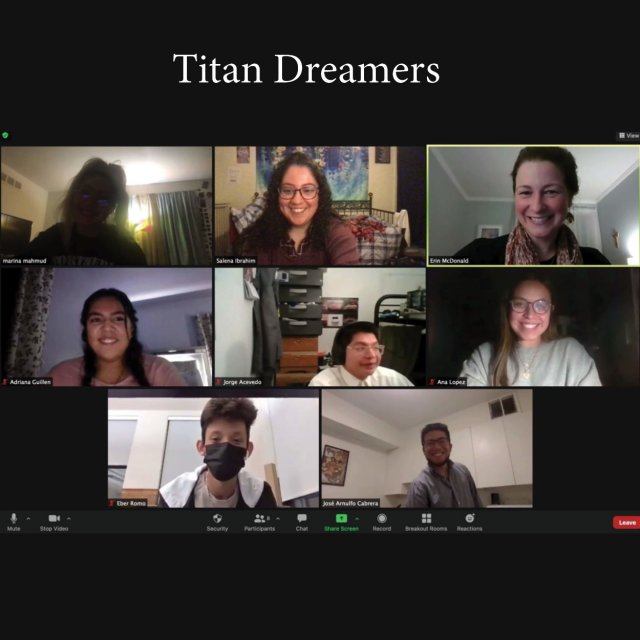 Giving Voice Core Team member Erin McDonald has been accompanying several young students at the University of Detroit-Mercy, several of whom have DACA, throughout the academic school year. She describes her experience accompanying the “Titan Dreamers” in this month’s newsletter:

Q: How long have you been working with the “Titan Dreamers”? And can you describe who makes up the group (Is it mainly DACA recipients or students w/ undocumented family members, etc?)

A: Titan Dreamers (Titan is the school mascot) is a new student organization that began this academic year (so in September of 2020). So it is a new group on campus and it emerged from a group of students who were concerned about their futures (given Trump era threats to the DACA program). They wanted to educate their peers about their experiences and advocate for a more just and inclusive campus community and country. The students are mostly DACA recipients but one of them is undocumented and one has recently received her green card. They are mostly Latinx students however one student is a young woman who was born in Israel.

Q: What is your role in the “Titan Dreamers” group? In what ways do you accompany these students?

A: I don’t have a formal role or title but I would say that I am accompanying these students on their journey in growing as leaders, advocates and courageous people of faith. When the first two students decided they wanted to do the work of justice on campus, they wanted to start by forming a group of other DACA students and allies. They came to me to ask if I would work with them to form this new group and of course, I said yes. I have accompanied them in many tangible ways, such as attending their weekly group meetings, offering resources and access to training/workshops to help them grow as leaders and faithful activists. I helped to connect them to the Ignatian Solidarity Network which connected them to some national networks and collaborations. For example, most of the students in this group are now active members of ISN’s national Undocu-Jesuit Network. The Undocu-Jesuit Network is for students at Jesuit universities who are undocumented or DACA recipients and they have bi-weekly Zoom calls together. This network is mostly peer-run by DACA students and provides our students with community, support, and places to dream and collaborate. I also accompanied our students through less tangibles, like listening to their stories, affirming their experiences, encouraging them at difficult points, and sharing prayer together. In the spirit of accompaniment, we have been walking together throughout the year, learning from each other, listening to each other, praying with each other and advocating for systemic changes both on campus and nationally.

Q: Undocu-Student week sounds like a powerful experience. Can you describe the week?

A: We had three major virtual events during our Undocu-Student Week and we had about 70 participants in the first two events. The first online event was Maria Ibarra-Frayre, a graduate of the University of Detroit Mercy, a DACA recipient, and an immigration activist. She shared her personal story and her experiences of being an undocumented student. The second event was with Jose Arnulfo Cabrera (from Ignatian Solidarity Network) and Alex Vernon (Detroit Mercy’s Law School - Professor) and they spoke about the current immigration policy changes affecting DACA and undocumented youth. The last event was an “Open Mic Night” event where students were invited to share personal stories, poems and songs that tell the story of their connection with experiences of global migration. This event has about 30 student participants. It was all virtual.

Hosting an Undocu-Student Week was an idea generated by the students so this was their project and I served in a supportive role of assisting with details, planning and resources. This was a big learning experience for our students as most of them had never created and implemented a large campus wide event before so we worked together parts of the planning and implementing that was new for them.

Q: Could you comment on how the changing status of DACA has affected student’s lives, particularly during the Trump Presidency?

A: The changing status of the DACA program under President Trump’s administration has a significant impact on our DACA students. The many ways in which the Trump administration tried to dismantle or end the program caused tremendous stress, fear and anxiety for our DACA students. Most of the DACA students in our Titan Dreamers organization came to the United States as infants or small children so the threat of possibly being deported to their birth country was terrifying because many of them have no memory of their birth country. One of our DACA students doesn’t speak the language of her birth country and she doesn’t know any of her extended family members who still reside there so this was enormously stressful. It also had a significant impact on two of our students who are undocumented and were not able to apply for the DACA program because the Trump administration has halted new applicants. All of this added tremendous stress on the shoulders of young adults who were already carrying a lot of pressure. Many of our DACA and Undocumented students are the eldest child so they have additional responsibilties in their family, like caring for younger siblings, assisting with family financial needs, and translating for parents. All of the students in our Titan Dreamers organization are first generation college students as well, which creates so much stress and pressure, which was made worse by so many of the Trump Administration’s immigration policies.

However this also motivated our DACA and undocumented students into action! This deep desire for a more loving, inclusive and just society prompted our students to act, to lead, and to challenge the status quo despite their insecurities. For example, our Titan Dreamer group completed training in advocacy and we met with Senator Debbie Stabenow’s office to advocate for humane immigration reform. This was one of the ways in which our student felt called to push for national level changes.

Q: How does your identity as a Catholic Sister affect your ministry with the Titan Dreamers?

A: As a Catholic sister, I am called to act in solidarity with our brothers and sisters who are experiencing persecution, injustice, or suffering. As a Sister of St Joseph, our charism is rooted in the Gospel of John which states that we are to love God and Neighbor without distinction, to be a catalyst for unioning love and reconciliation in all that we do. In the spirit of religious life, I am called to be a contemplative in action which means that the fruit of my prayer, discernment and meditation on scripture compels me to walk with others towards the creation of a more loving, inclusive and just world. Accompanying our DACA students through this year of tension and hope, was an experience that invited me to grow in faith and love in so many ways.

Q: What do you want the world to know about your experience working with the Titan Dreamers - and other DACA recipients?

A: I want the world to know that DACA recipients are an incredible group of talented and courageous young adults who enrich the fabric of our country. As people of faith, we believe in the sacredness and inherent dignity of all life therefore we must advocate for humane immigration reform so that students like those in the DACA program have a viable future and a pathway to citizenship. We want to ensure that all of our brothers and sisters who are suffering, seeking safety, and freedom are treated with dignity, respect and justice. As our Titan Dreamers say, “dreams have no borders.”