Reflections on the Giving Voice National Gathering by a Religious Noob 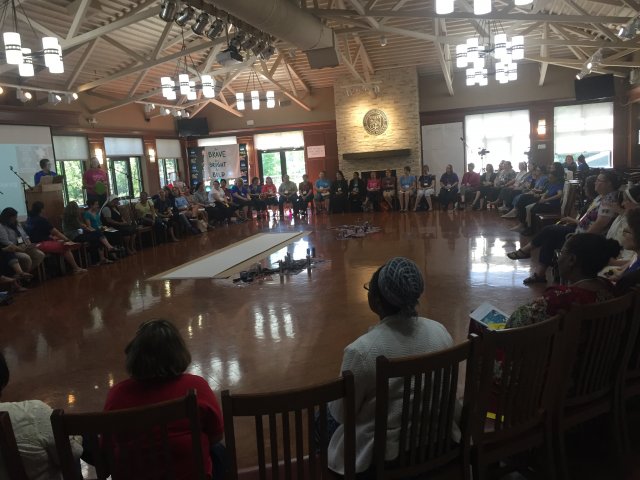 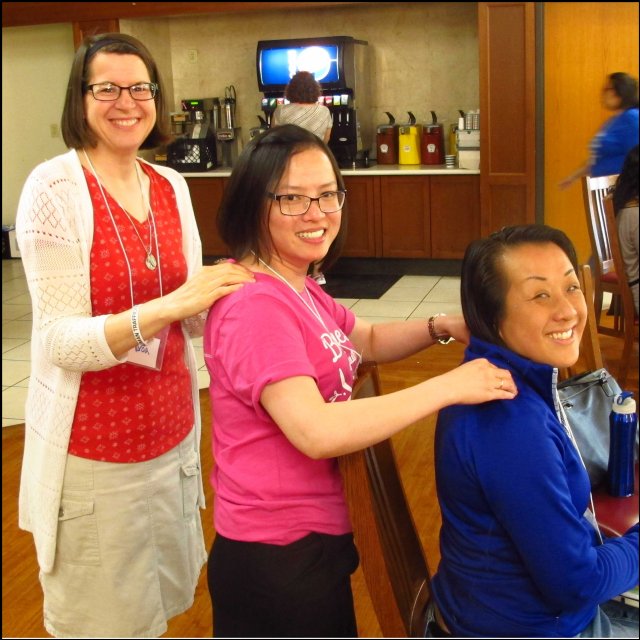 I am not even a Religious Sister. Well, not yet. Answering God’s call late in life, at 46 years old, I will begin my life as a sister in August of this year with the Franciscan Sisters of Perpetual Adoration. Even so, I was blessed to attend the Giving Voice National Gathering in St. Louis last month. I wondered what a conference planned and run by the youngest religious sisters might be like. Would it have the depth and connection that I was hoping for?

As I stepped into the dorms at Fontbonne University, the energy that ricocheted off the walls at the check-in station and the volume of Sister’s voices greeted me as I got my keys and my GV T-shirt. Sisters with habits and without laughed and hugged as old friends found each other and new friends were made.

The large room we spent the next three days in was spacious. Eighty chairs circled the room. It’s a sister thing, chairs in circles. It’s just something they do. As the chairs filled with young women in their 20’s, 30’s and 40’s, it was evident that this was a beautifully diverse group. I lost track of how many Sisters were multi-lingual, but when one of the sisters spoke five languages, the group erupted into a deafening roar.

I know what you’re thinking, deafening? I was surprised too! Before joining my community, I might have believed sisters were singularly quiet and contemplative – like the Sound of Music - and although I have learned so much about the complexity of the religious, the volume throughout the event – in celebration, encouragement and joy – continued to make me smile. Don’t misunderstand though, in Mass and prayer, it was so quiet you could hear the birds singing outside.

The Gathering was peer-led and included a perfect blend of personal experience stories, breakout sessions, small group discussions, large group sharing and a profound art project filled our days. It was filled with real and deep topics including religious persecution, white privilege and the border crisis. The sharing was personal, filled with stories of engaged people changing lives and changing minds. Sometimes the stories were heartbreaking, but more often they were inspiring and motivating. At one point, I looked around at the group and thought, “THIS is the future, and it’s awesome!”

Being so new to religious life, I was initially unaware of some of the division that exists between communities. Traditional or liberal, habited or not, contemplative or apostolic – the comparisons simmer as a current under all the vital work sisters are doing. It is not unlike the division you might read about in the Church, in the country and in the world today. I was pleasantly surprised when the group sat down to talk about how we can come together in unity to create communion while respecting the diversity of religious sisters. I was particularly moved when sisters, who others would label as being on opposite “sides”, authentically joined the conversation, concentrating on active listening and healing old wounds, so we all can move forward together.

In a world of dialogs dominated with words like “diminishment” and “completion”, which are quite scary to this upcoming sister, the Giving Voice National Gathering was a future-focused conversation dripping with the promise of great things. The Church is alive in these intelligent, articulate and passionate sisters, speaking different languages, from many countries, and yet totally committed to following God’s path, unique to each person and yet in communion with all religious sisters.

As I begin my own journey, my experience at the Giving Voice National Gathering has inspired me and renewed me in my commitment to this new life. Stepping forward, I know that I walk with so many others who will not only support me and encourage me, but challenge me in my authenticity as we travel together into an amazing future. We will discover, together, what exactly that is – but, if this gathering and these sisters are any indication of what it will be like – I can’t wait to see what happens!