When I was in second grade, we learned about palindromes. Already a classified nerd, I was obsessed. For homework we had to bring in three examples of this unique word classification. My list read:

1. mom
2. dad
3. Madam, I'm Adam.
(Obviously the third landed on the list thanks to my own mom.)
My next vivid memory of palindromes occurred in college when I was sitting in what turned out to be one of the most impactful classes I would have, General Systems Theory. My dear professor told us about a book whose author had a "palindromic name." While I delightedly defined palindrome as a word that reads the same forwards and backwards, my professor was surprised that I knew the definition. Mark Kram was the author of the book he referenced.
Over the weekend, Katie and I watched the 2016 sci-fi film, Arrival, with Amy Adams portraying a linguist who works on a team trying to communicate with intelligent life from "the great beyond." Language and words—and their impact on science, on life, on us—take center stage in the film.
It's one of those movies that woke me up in the middle of the night because it was so, so good and was still on my mind. And I've spent quite a bit of time thinking about since we watched.
It's hard to write about the film without spoiling it, so for now, if you're looking for something to watch, consider Arrival!
Let us walk in the holy presence. 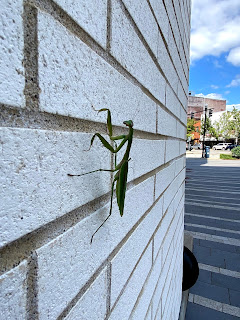 The Summer Day
Mary Oliver
Who made the world?
Who made the swan, and the black bear?
Who made the grasshopper?
This grasshopper, I mean—
the one who has flung herself out of the grass,
the one who is eating sugar out of my hand,
who is moving her jaws back and forth instead of up and down—
who is gazing around with her enormous and complicated eyes.
Now she lifts her pale forearms and thoroughly washes her face.
Now she snaps her wings open, and floats away.
I don't know exactly what a prayer is.
I do know how to pay attention, how to fall down
into the grass, how to kneel down in the grass,
how to be idle and blessed, how to stroll through the fields,
which is what I have been doing all day.
Tell me, what else should I have done?
Doesn't everything die at last, and too soon?
Tell me, what is it you plan to do
with your one wild and precious life?
Source URL:
http://walkingintheholypresence.blogspot.com/2021/09/arrivallavirra.html