The Gift of Being Christmas 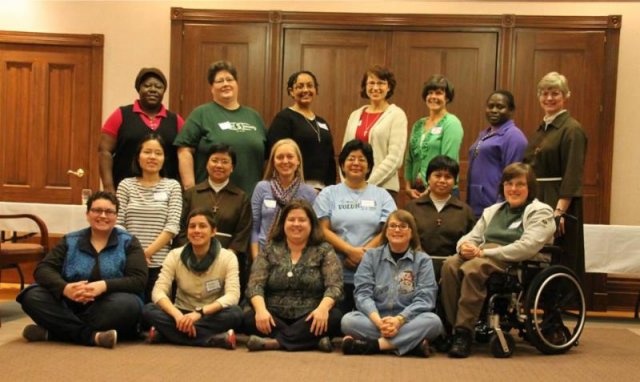 Last week, I opened a text from Kaitlin to find a picture of the much anticipated ultrasound.  She and her husband, Jason, had just found out that their first little bundle of joy, due in May, would be a boy!  Their future as a family is taking a clearer shape.

This Advent has come alive for me in a new way as Jason and Kaitlin journey through her pregnancy.  I've loved getting an inside look at their powerful preparing, awaiting, and wondering.  When I saw her at the end of her first trimester in October, much had changed within and around her already.  She was eating "a ton" in her words, wearing stretchy pants, and dreaming with Jason about names and baby rooms.  And she was praying, a lot.  She couldn't imagine having a baby, she said, without these months to transform into a mother.

Women religious are some of the best Advent-ers around.  Religious life is no stranger to the journey of waiting and dreaming in joyful hope that Kaitlin describes, particularly as the style and nature of this life form evolve through history.  I would venture a guess that in recent decades, some Sisters felt to be in the middle of a very long and especially still Advent as they wondered about the future of their congregations.  Things were no longer as they had been.  There was perhaps a sense in the changing that something was emerging, but there was no "due date" for when a breakthrough might happen.

Our Sisters continued to live their lives of prophetic witness and love, at the same time wearing spiritual "stretchy pants," if you will, to allow new life to grow when the time was right.

A few years ago, I moved into Casa Caridad outside of El Paso, Texas.  This home was a space for all kinds of discernment and seeking.  The three Sisters of Charity there, Janet, Carol, and Peggy, had been offering hospitality to young women in various ways for about twenty years.  In those two decades, none of the women who passed through their community entered the Sisters of Charity.  And yet, they kept preparing room, both physically and deep within their hearts, believing in the good that was and the new that would come.

We've been emerging from those Advent waiting days, haven't we? Now, we speak often of "something new."  It's like Kaitlin's wonderful "baby bump" - religious life is really "showing!" We've seen the ultrasound.  We're ever more aware of and excited about what's taking flesh.

It isn't easy, because what birthing is?  But it is a gift.  Among Giving Voice circles, we dream and wonder in ways that allow the emerging future of religious life to take flesh.  When the young Sisters in Cincinnati gathered at our Motherhouse a month ago, the air filled with joy.  Our energy seemed to brighten up the wise and quiet halls of the historic building, like we are somehow the new life leaping for joy in the womb of religious life.  Like Christmas is upon us.

As young(er)/new(er) religious, we are called to be women radically infused with both Advent and Christmas. Like Sisters have since the beginning, we live in that sacred place between beholding that Christ is born and waiting for Christ to come.  So often, it is happening all at the same time, with one eye lovingly on the present and another expectantly on the future.  We bear Christ, and we make space for those who will bear him with and after us.

On this celebration of the Incarnation, let's rejoice together at the graced moment we find ourselves in, a moment to which God has invited us.  Although we don't know the small kick of a child growing within, we surely know what it is to carry new life in our very beings.  "A Psalm for Midwives" by M.T. Winter says, "...like the pregnant woman, we are touched by a divine promise."  Mary and Joseph are at the cradle of their son, unsure of what his life will bring but faithful in that divine promise as they behold.  And so must we be.  We wait, yes, always with arms open to whatever comes, and today we celebrate!  Emmanuel is here.  Jesus is born in, around, and through you and me.  What a gift it is, together, to be a part of the shape "God with us" takes.