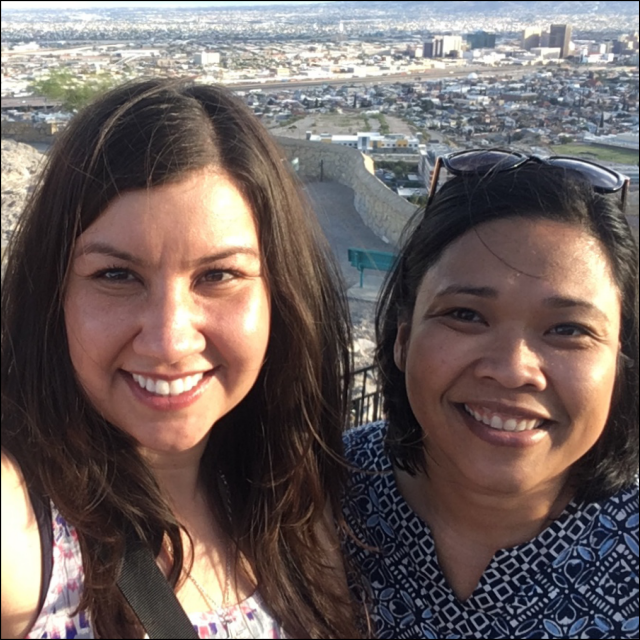 La última decade I had a sueño. Mi sueño was that un día I would live and work at la frontera. I hoped to accompany our hermanos/as living at the margins fighting for sus vidas. Since the beginning of my vocation story this sueño has been in mi corazon.

La última decade I was dancing through the stages of formation in Chicago, studying at Catholic Theological Union, and discerning this call to love Dios and el pueblo de Dios as a religiosa. Gracias a Dios, I did not dance sola. I discovered many great compañeros/as (who also liked to baila) especially in Giving Voice.

La última decade I was dreaming of la frontera and wondering how it would become una realidad. La frontera is in mi sangre. I am a third generation Mexicana-Americana from the US/Mexico border. I am home in this bicultural/multicultural espacio. I embrace and celebrate the Mexican and American parts of my identity. At the same time, I am acutely aware of the striking diferencias between each cultura. I look for puentes and I try to be a puente making connections and building relationships.

Dios certainly puts puentes in mi vida to connect me to other realidades. Last summer at our National Gathering, I met Romina, Sister of Charity of Cincinnati, who has lived and worked in the El Paso/Juarez area for over 20 años. She was literally the first person I met as I came off the plane when I landed in St. Louis. I asked her if I could visit and explore las posibilidades at la frontera. She was most kind to host me and connect me with so many wonderful people doing incredible ministerios in El Paso and Juarez. Through this experiencia I was able to discern next steps with mi IBVM comunidad.

During my visit, we attended a concert, #ElPasoFirme. One of mis bandas favoritas played, La Santa Cecilia. We attended this outdoor event in solidarity with la comunidad. The concert was a form of resistance against white supremacy in response to the Walmart shooting where 22 people were killed on August 3rd. Mexicans were the intended targets. In between the performances, we heard powerful messages from social activists, witnesses, and human rights organizations.  I was very touched by the strength and unidad I observed that noche. I felt in mi corazon a strong desire to remain with this comunidad.

I begin una nueva decade as a finally professed hermana living and working at la frontera! With the blessing of mi comunidad and financial support from the Wheaton Franciscan Sisters, I moved to El Paso, Texas in Octubre. I’m living with the School Sisters of St. Francis. I met one of the sisters from this comunidad at the LCWR conference which I was able to attend as a GV guest. Out of the hundreds of people there, I sat at the same mesa as this sister who was another puente to El Paso. Dios es bueno!

Almost cada día I cross the puente from El Paso into Juarez, Mexico where I have the gran privilegio of accompanying our familias seeking asylum. Before June, the people I am accompanying would have been able to wait for asylum with their familias in Los Estados Unidos. Since the Migrant Protection Protocol (MPP) aka “Remain in Mexico” program went into effect, people seeking asylum now must wait in Mexico. This program is endangering thousands of people fleeing violencia, poverty, and valid threats on their vidas by forcing them to wait in Juarez. People who are migrants are vulnerable to being kidnapped and ransomed or trafficked by organized crime.

Our hermanos/as are waiting in Juarez for several months between multiple court dates. One mujer de Guatemala with a two year old daughter has been in Juarez since June. She just had a court date in December and must wait until Agosto for her third court date. La realidad is that a very small percentage of people are actually granted asylum. Policies are changing constantly and not in favor of our hermanos/as most in need.

Through Romina, I connected with a community organizer and a powerhouse of a mujer. This person connected me to a humanitarian assistance network where I get to serve in a variety of areas in Juarez.  Although I am very aware of my limitations, I am grateful to enter these espacios sagrados and be presente. I am paying close attention to the realidades, contextos, and systems in Juarez.  I am learning so much every day. The migrants are my teachers.

I’m accompanying women and their children at a Casa de Acogida “House of Welcome” which is an international intentional community. The women are waiting for their asylum cases. While they wait, they are beginning a project to earn money through making embroidered bags to sell. I’m blessed to help them with this process. I also assist at a port of entry where people are brought to Juarez from U.S. detention centers. I get to offer them basic items such as toothbrushes, hygiene products, and shoelaces which are taken away in the detention centers. We serve coffee and snacks. We visit with people as they arrive. I cut their bracelets off from the detention center and encourage them to go to a shelter as it is the safest option. There are familias, single people, and lots of children. I pray for the grace to honor each person’s human dignity.

I have heard historias filled with layers of trauma. There is the trauma of why they fled their beloved homelands to the trauma of the dangerous journey through Mexico and across the border.  There is the trauma of being in the overcrowded detention centers known as la hielera “the icebox.” There is a lot of pain to hold and many times no palabras that I can say. At the same time, there is so much esperanza in my experiences with the people. I feel so bendecida just to be in the presence of our hermanos/as.

Mi corazon is full as I return to El Paso cada día. I have una hora o dos to wait in line at the puente to cross through the border patrol station. This gives me tiempo to reflect and thank Dios for the many gifts I have received, but above all for the regalo of beginning a new decade seeing God in the people at la frontera.  It is truly a sueño come true!